Why Google May End Up In Bed With Yahoo

“Yahoo organics and ads (are) powered by Google,” Aaron Wall, the founder of SEO Book, informed the market on Wednesday. 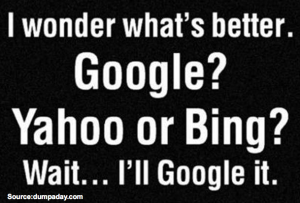 “I am uncertain to what degree they are testing search results from Google,” Mr Wall said, noting that “a cynic might question how much actual choice there is if on many searches the logo is different but the underlying ads & organic results are powered by Google,” and an ex-Google executive runs Yahoo.

Great catch, really — but what does that imply for the relationships between Google and Yahoo?

What Is Going On

We are not even at a beta stage at present with regard to Yahoo’s organics and ads powered by Google, but the topic deserves attention and testifies to the attempt put in place by Yahoo to secure more flexibility in search monetisation.

There are obvious barriers, however, if Google and Yahoo make an attempt aimed at deeper ties, history shows.

On the one hand, Google is faced with regulatory constraints as its market dominance is being questioned — nothing new here.

On the other, the exactly same deal was discussed in 2008, but the parties failed to reach agreement because regulators balked.

As we pointed out back in April in the wake of a renewed search alliance between Yahoo and Bing that would give the former more freedom in the search space, there are two alternative scenarios right now, neither of which makes much sense. To sum up our previous take:

We were right, but now it’s a balancing act for both companies.

As with most tests at a pre-beta stage, the parties may want to collect data able to predict future trends more accurately. Furthermore, Google wants to shore up its dominance, while Yahoo must find new partners to grow.

Game-changing partnerships are thin on the ground across the Atlantic. If — and this is a big “if” — Yahoo’s market share in the US market starts to drop or it fails to monetise on desktop and mobile search, Yahoo could take a bigger cut out of Google’s ads business — the latter may pay up to benefit from less competition, regardless of what regulators have to say on the matter.

In November 2008 the Department Of Justice said: “Yahoo and Google abandoned their advertising agreement after the Department of Justice informed the companies that it would file an antitrust lawsuit to block the implementation of the agreement. The Department said that, if implemented, the agreement between these two companies accounting for 90 percent or more of each relevant market would likely harm competition in the markets for Internet search advertising and Internet search syndication.”

One caveat is that their combined share is now below that threshold, but it remans to be seen whether “lower prices, better service and greater innovation” will be granted.

If you want to discuss this topic with our team, please email us at info@hedgingbeta.com