Google Vs Amazon.com — Stick To The Knitting

Google and Amazon are at war — both online and offline — and that has become even more evident in recent days. Let me spend a couple of words on this.

BuzzFeed has rumoured that Google would provide a service to connect online users with local ‘home providers’, such as electricians and plumbers.

The rumour holds some merit, in my view.

Last week, its rival Amazon launched a Home Services site aimed at connecting online users to local business services. How cool is that?!

Well, Google and Amazon want to deliver their services in real time, of course — and products such as Amazon Prime and Google Express should help their customers receive their goods more quickly.

As far as idea generation is concerned, Amazon went even further with a 3D printing patent, which was submitted in February. 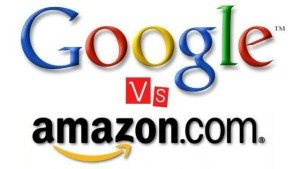 If the project will be actually developed — and there are reasons to believe it will — Amazon will be able to use 3D printing delivery trucks, hence a system that may reduce costs and capital invested in the warehouse. Google, for its part, is not sitting idle and is eager to attract and meet customers in its new stores. It opened its first new branded store in London earlier this month.

The expansion plans of both companies in the offline space are inevitable, and understandable, as they try to penetrate a market where they can steal market share to logistics companies and producers.

Well, their online offering remains core and they could do a much better job there.

Gmail users, for instance, have been affected by security issues between Saturday and Sunday — as Google apparently forgot to update its SSL certificate! But Amazon recently got the green light from the EU for its cloud services for global data protection…..1-0 already for Amazon in the second quarter?

If you want to discuss this topic further and/or you want to learn more about our latest SWOT audit of Amazon.com, please email us at info@hedgingbeta.com